What about the tech majors, which delivered a phenomenal performance last year? Microsoft kicked off big tech earnings on a positive note, with nearly $3 billion higher revenues than the consensus estimate. Facebook also reported upbeat results on a strong recovery in advertising revenue. But Apple showed us how it’s done.

That Was Just Peachy

Apple didn’t just beat expectations. The iPhone maker shattered its own records and expectations with its fiscal first-quarter results, which included topping $100 billion in quarterly revenues for the first time in history. What was even more jaw-dropping than the 21% sales growth that took total revenues to $111.4 billion, is that the performance was broad based – sales of every product category grew by double-digit percentage points and record sales were generated in every geographic region. Impressive numbers considering Apple was forced to temporarily shutter some of its stores globally due to the pandemic.

Earnings of $1.68 per share stood convincingly ahead of the Street expectations of $1.41 per share. Moreover, this came at a staggering gross margin of almost 40%.

The work- and learn-from-home trends worldwide did help the sales of Macs and iPads. What really contributed to the company’s strength was people clamoring to upgrade to 5G, with the four iPhone 12 models launched in October 2020.

What Upset the Apple Cart?

Apple’s stock plummeted more than 3% after management released blowout quarterly results. There were essentially two reasons for the stock losing steam. First, the overall equity markets took a tumble that day, even amid news of tech giants posting enviable sales and earnings. In fact, the selloff was steep enough to spook even the most stronghearted traders, as can be seen on the Acuity Trading Dashboard. 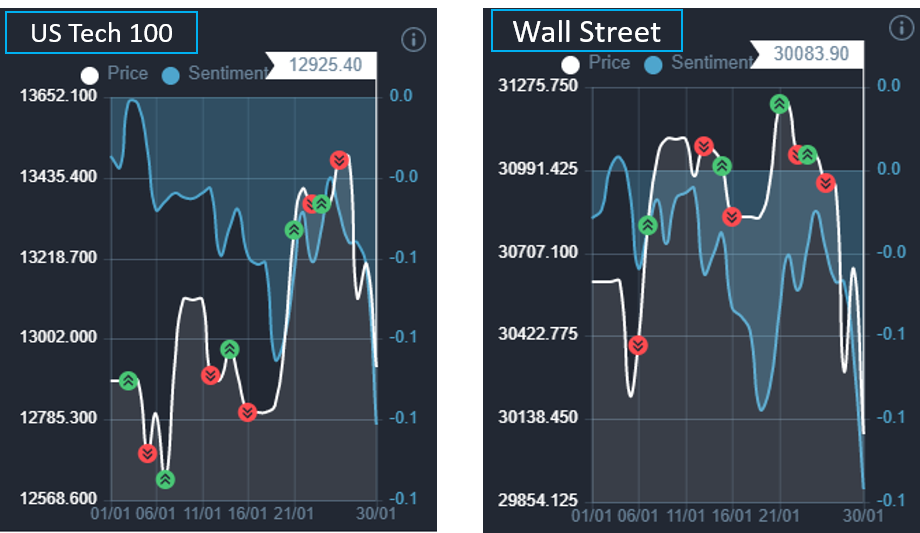 Apple’s stock had been poised for profit taking for quite some time. In 2020, the stock had risen by more than 80%, as investors drove Apple’s market valuation from around $1 trillion to a record high of $2.4 trillion.

Not the Time to “Think Different”

Market sentiment for Apple is overly positive, as evident from the Acuity Trading Dashboard. This is likely to remain the case at least in the first half of 2021. 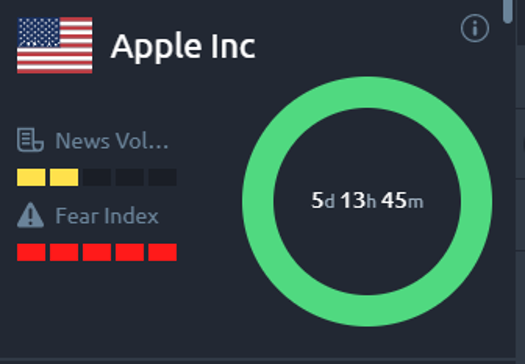 But is Apple positioned for an encore? Can the company match up to these high expectations? We remain bullish for a number of reasons.

Apple has managed to reignite iPhone sales growth. Its 5G offering is still in the early stages and could ramp up over the next several weeks. Also, the company has launched some new and exciting hardware, like its AirPods and Beats headphones. The latest addition is the premium AirPods Pro Max headphones, launched in December. Apple has also been successful in developing new subscription-fee based services, including Apple Music and Apple TV+, and other revenue streams like Apple Pay and Apple Arcade. This is the segment that earns the highest margins. Although most people think of Apple as a hardware company, the Services business has been identified as its growth engine going ahead. That’s the vertical investors should really keep an eye on.

There have been speculations around Apple’s plans to enter new market segments. The company certainly has the wherewithal to do so. A recent Bloomberg News article said that Apple may launch its first virtual reality headset (like Oculus Quest 2) as early as 2022. We won’t be surprised if Apple’s VR headset has the most powerful processor that the world has seen so far.

Recently Reuters also quoted unnamed sources as saying that Apple has plans of manufacturing autonomous cars and targets to launch the first model in 2024. Since 2014, the company has been spending R&D dollars to develop an autonomous driving system that could be integrated into a car. But now Apple has ambitions of going beyond and launching its own self-driving car.

The one thing that keeps us a tad wary is the lack of guidance from management. Before the pandemic, Apple always provided a precise revenue forecast. Management not only refrained from providing any forecast, CEO Tim Cook and CFO Luca Maestri maintained a cautious tone during the latest earnings call. Still, Apple has an enormous kitty to spur growth and is well positioned to propel sales as the economy recovers.