Key indicators that illustrate in graphic form our altered world.

Output frozen
Economic output has fallen this year at a pace not seen since 1709, when the Great Frost descended over large swathes of Europe and caused Britain’s economy to shrink by about 13 per cent (Gurpreet Narwan writes). In the early days of the pandemic, the outlook looked even worse. The Bank of England was forecasting an even larger slump of about 14 per cent for 2020. This has since been moderated to 11 per cent, still the largest downturn in more than 300 years. The record slump will be followed by growth of just over 7 per cent next year, but it will take a whole year before it returns to its pre-crisis level. 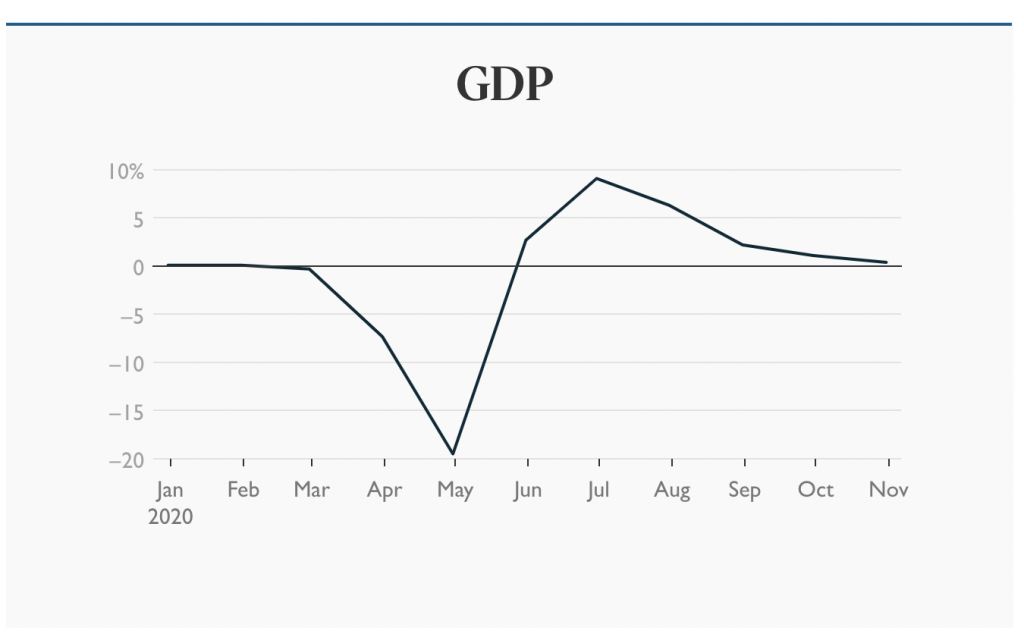 Retail revolution
It took two decades for British supermarkets to lift their online sales to 7 per cent of total grocery sales, but only eight weeks to take it from 7 per cent to 14 per cent (Ashley Armstrong writes). At the start of 2020, supermarkets were making £718 million in online sales a month, but this has soared to £1.4 billion during the Covid-19 pandemic.

Even when lockdown restrictions eased, demand for online deliveries remained high, suggesting a long-lasting switch in people’s behaviour. The shift has been most noticeable in customers aged over 60 who tried online shopping for the first time.

Analysts have said that pre-coronavirus online orders cost supermarkets £10 per delivery, resulting in negative margins. Despite the extra costs of hiring thousands of drivers and pickers, supermarkets are enjoying online deliveries becoming profitable as shoppers buy more food. The mass roll-out of click-and-collect services has also eliminated the costs of delivery for the grocers. 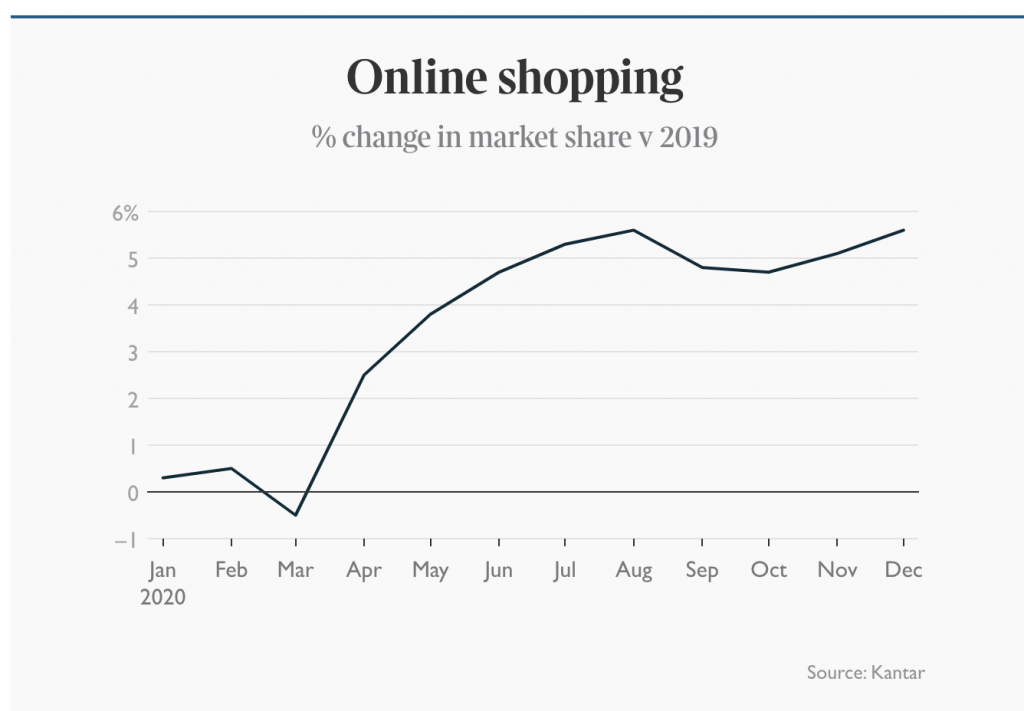 Oil glut
In a brutal year for the oil industry, April stands out as extraordinary (Emily Gosden writes). With four billion people worldwide subject to some form of lockdown, demand for oil plummeted by 25 per cent, leading to an unprecedented glut of crude.

The International Energy Agency called it the worst month in the worst year in the history of global oil markets. As storage facilities came close to overflowing, Brent crude tumbled to lows not seen since 2002 of less than $20 a barrel, down from more than $65 a barrel at the start of the year.

West Texas Intermediate, the American benchmark price, plunged into negative territory for the first time. The collapse in prices led to record losses and dividend cuts for BP and Royal Dutch Shell, the latter for the first time since the Second World War. Yet there were winners from the turmoil, too: many trading houses reported bumper years and a group of Essex traders are reported to have made $660 million on the day that WTI went negative. 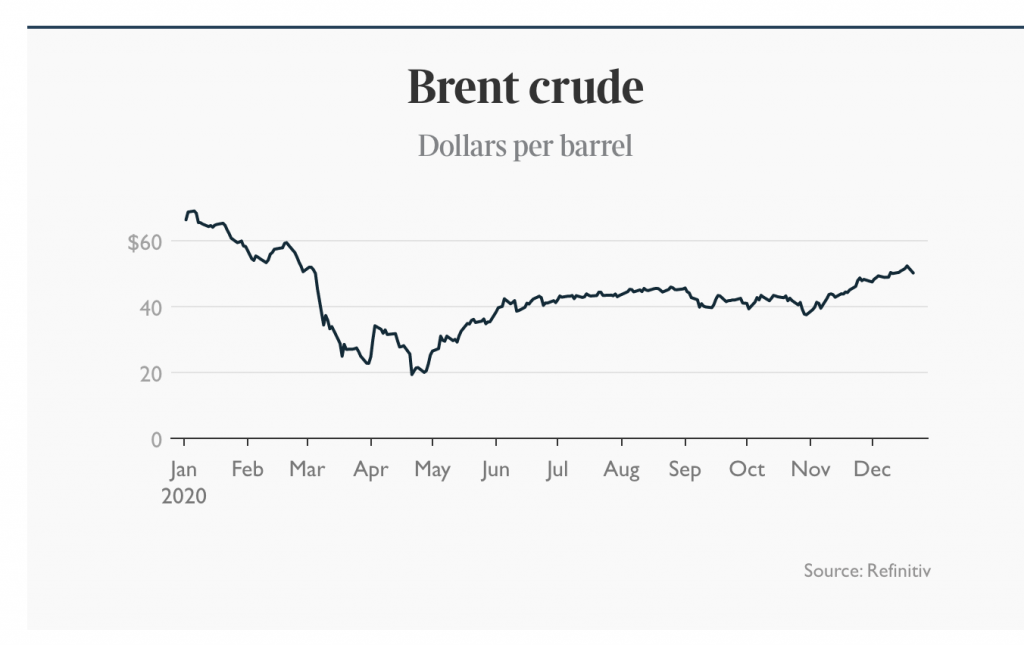 Airports and airlines
There is little agreement as to what 2021 will bring for airports, airlines and the aviation sector in general — other than this: the short-haul and leisure market will get back in the air long before any decent numbers return in the business and long-haul segments (Robert Lea writes).

The industry is coalescing around the notion that a full recovery will not be possible until 2024. 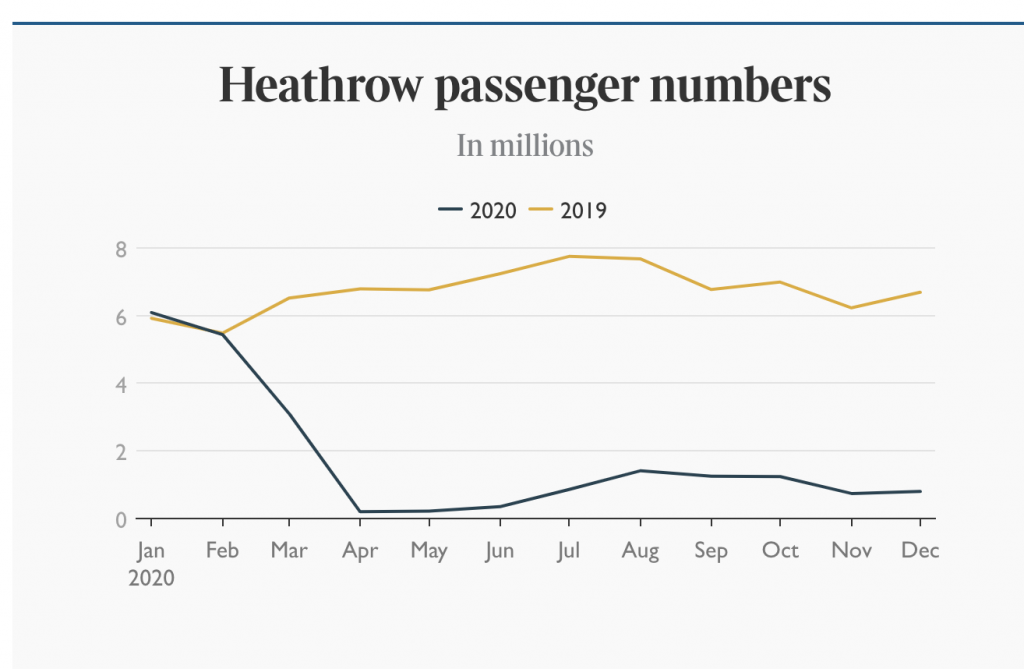 It also is beginning to admit that it believes the first half of 2021 will not be much better than the fourth quarter of 2020, during which there has been a general fall in western economy passenger numbers of between 80 per cent and 90 per cent.

The high hopes of the industry around the introduction of vaccines and countries co-operating on travel restrictions has given way to the grim reality that rising death tolls mean western economies are going back into strict lockdowns into the new year. Heathrow, for one, is making no forecasts on how 2021 will turn out.

Virtual face to face
It is unclear when “Zoom” entered the lexicon as a verb akin to “Google”, but it was probably around February or March this year, when the virus was spreading from east to west and the first lockdowns were following (James Dean writes). Video-calling was nothing new, of course. Many a mum, dad and grandparent had mastered the art of Skype or Facetime long before Zoom Video Communications came into view. However, it was the simplicity with which perhaps a dozen friends and family could come together virtually to celebrate a birthday, or take part in a quiz, that made Zoom so popular, so quickly. 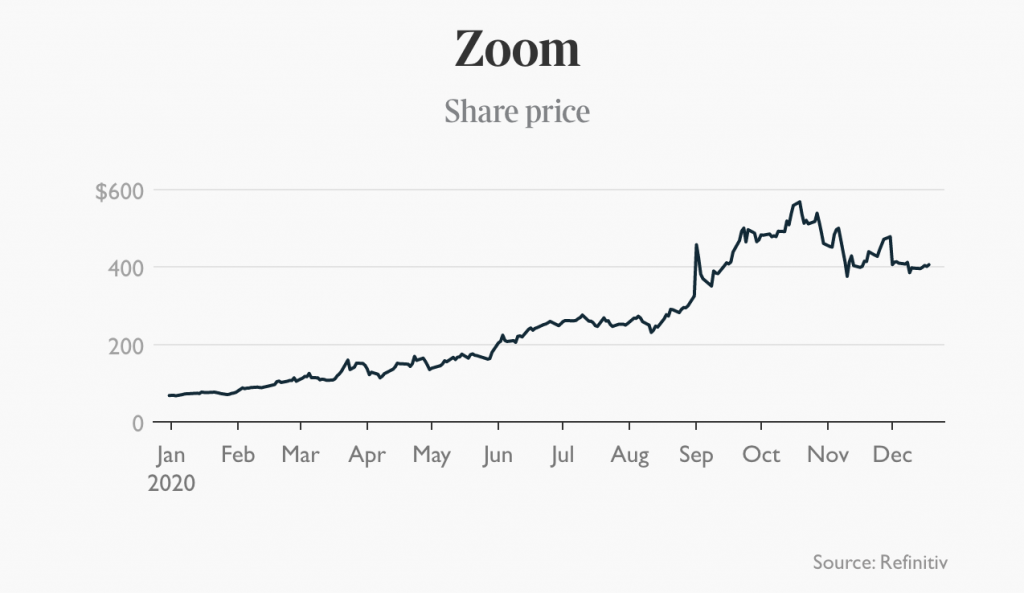 Not that this was the company’s intention. Zoom was built for business video conferencing, not socialising. Indeed, Zoom is generally free to use for small gatherings. However, its success in the consumer market helped to drive corporate subscriptions and Zoom’s shares rose rapidly. Investors who bought in at the end of last year and cashed out in late October, just before news of the first vaccines broke, would have made a 735 per cent profit.

Saving jobs
No single piece of policy innovation in the pandemic was more substantial than the furlough scheme (Philip Aldrick writes). At its peak, it was protecting 8.9 million jobs, a third of all 27 million UK employees. Another 2.6 million self-employed workers, half the total, were supported by a separate but similar scheme. All this meant that the government was part-paying the wages of 11.5 million people who could not work.

Between them, the schemes are expected to cost about £85 billion for the 13 months to April 2021. The goal is to protect jobs, which it clearly has. Although about a million more people are out of work, few economists expect mass unemployment any longer. Warnings of 12 per cent unemployment have been replaced by forecasts of only 6 per cent to 7 per cent, making it an expensive but effective policy. 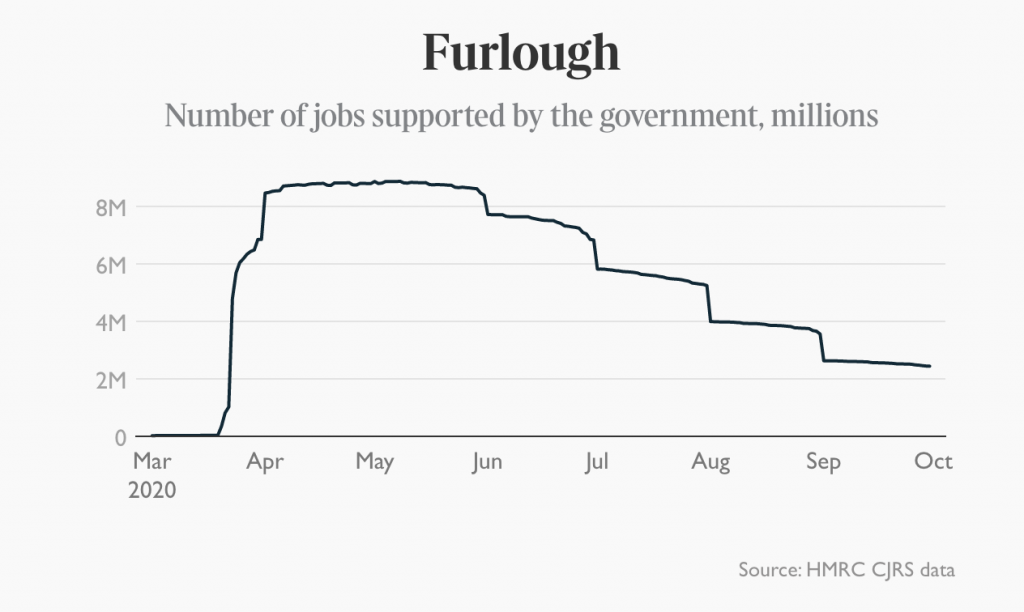 Idle hands
With the state protecting jobs and businesses and official GDP data lagging events, the most startling and immediate statistic showing the scale of the economic lockdown was hours worked (Philip Aldrick writes). There was a clear 20 per cent closure of the economy before and after lockdown. You have to go back to 1994, when the working age population was five million fewer than today’s 41.5 million, to find a year in which fewer weekly hours were worked. 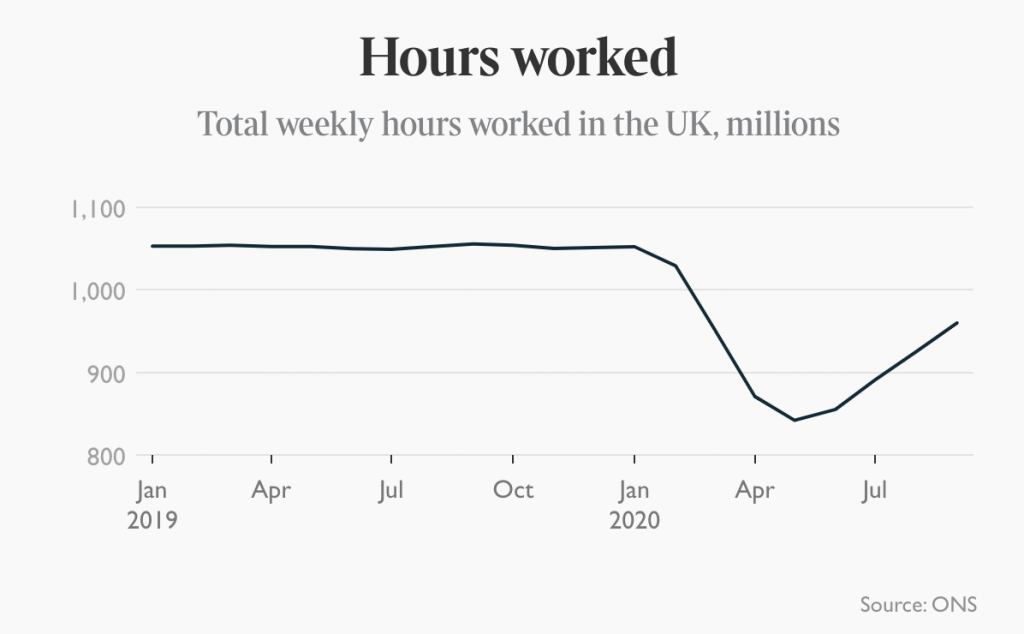 At its lowest point, the UK economy lost 17 years of growth but 26 years in terms of hours worked. All of which happened over the space of barely two months, March and April. Hours worked remain about 10 per cent lower than pre-pandemic levels and the same as they were in 2013.

Glittering performance
The price of gold surged to a record high this year as investors sought safety in the precious metal, which has long been a popular investment in times of uncertainty (Tom Howard writes).

The year began with a wobble, though, as panicked investors pulled their money out of almost everything in the immediate aftermath of the coronavirus crash in February and March. 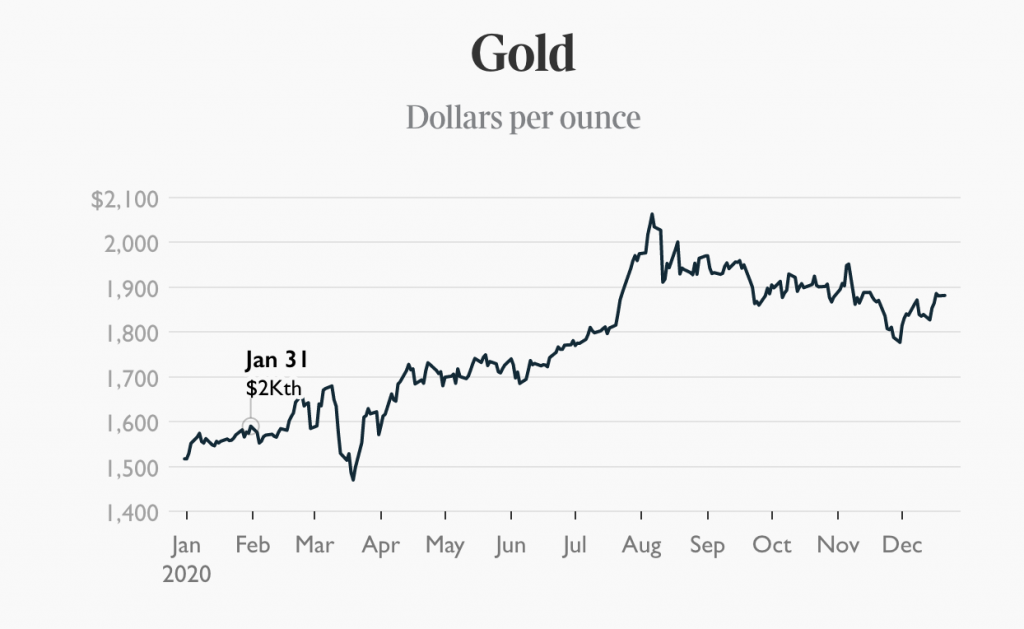 As the market recovered its poise and concerns over the effects of the pandemic and of the central banks’ loose monetary policy set in, gold rallied over the summer and reached a high of $2,072 per ounce at the beginning of August. However, the vaccine developments in November took the shine off gold somewhat and analysts believe that it will struggle to surpass August’s peak over the coming year. HSBC analysts predict that the gold price will end 2021 at around $1,907 an ounce. Bank of America is a bit more bullish, although it recently slashed its forecasts to factor in the vaccine rollout. Its analysts expect gold to hit $2,060, $150 shy of their pre-vaccine estimate.

Covid success
Before this year, Novacyt was a little-known Anglo-French diagnostics company struggling financially on the Aim market with a share price of 13p (Alex Ralph writes). Novacyt’s quick launch of coronavirus tests after the outbreak, endorsement by the World Health Organisation and supply contracts with governments around the world, including Britain, as well as partnerships with Big Pharma, transformed its prospects and made it one of the biggest risers on the London Stock Exchange’s junior market this year.

The shares hit a high of 491p in mid-April during the first lockdown as Novacyt emerged as an important part of the response. The stock rallied further in the autumn, peaking at £11.94 in October, valuing Novacyt at £843 million, after gaining fresh impetus from a second contract with the Department of Health and Social Care, and Numis, its new joint house broker, initiating coverage with a target price of £13.65.

Debt
The government’s coronavirus rescue package has pushed the national debt to its highest level since the early 1960s, when Britain was still grappling with its postwar liabilities (Gurpreet Narwan writes). Public sector net debt at the end of November was almost £2.1 trillion, or 99.5 per cent of GDP, after climbing above 100 per cent earlier in the year.

Economists have already begun speculating about the difficult decisions the chancellor will have to make in future to bring the public finances back on to a stable footing. According to the Institute for Fiscal Studies, the government will need to find £40 billion through spending cuts or tax rises to repair the public purse.

What 2021 May Have in Store for the Global Financial Markets

What 2021 May Have in Store for the Global Financial Markets