Expert projections for global growth in 2023 have been downgraded since the beginning of this year, with central banks focusing on interest rate hikes to curb skyrocketing inflation. However, the situation is not as dire as what overly bearish views suggest.

Some Signs of a Silver Lining

The US added 261,000 nonfarm payrolls in October, surpassing forecasts of 200,000. October’s report suggested strength in the US labour market despite the concerns around an economic slowdown. The latest inflation figure was also lower than projected. Although the UK has been facing political turmoil amid an energy crisis, its latest GDP data shows a lower-than-expected sequential contraction in the third quarter, with 2.4% year-over-year growth. The latest data release from the Eurozone was also above expectations, with industrial production growing 1.5% in August, handsomely beating expert projections of 0.6% growth.

While all is not well in the global economy, the retail segment is getting ready to face another steep learning curve, after navigating the pandemic era. Retail, especially the discretionary segment, is highly sensitive to consumer sentiment. The latest data release from the US shows consumer sentiment declining to 54.7 in November, from 59.9 in October, below market forecasts of a reading of 59.5. As long as inflation remains elevated, consumers will hold back spending.

In this uncertain consumer climate, investors look for the most resilient companies. These are big names that are likely to face recessionary pressures head on and outperform the market. This requires extreme execution efficiency, to preserve earning margins, which is what technology promises to bring to the corporate landscape.

Increasing Role of Technology in Retail

A recent McKinsey report showed retail as the industry with the highest digital adoption by consumers. Retailers are likely to continue investing in their transition from traditional brick-and-mortar stores to online order fulfilment centres.

Growing intelligence along the supply chain will help keep inventories in check. Excess inventory can be a significant drag on retail bottom-lines and their stock valuations. In June 2022, while consumer sentiments approached lows, inventory overhang forced retailers like Target and Costco to write down profit expectations. Investors responded by shedding their shares. Retailers can either announce deep discounts to clear inventories or reduce their inventory overhang with sound technology solutions to protect their earning power. Brands like Lululemon turned to RFID technology that allowed them to temporarily convert their stores to distribution centres during the pandemic spike in orders. Such technology can be adapted for managing inventory for ecommerce-related distribution centres. Walmart allows suppliers to directly access data of product stocking at its distribution centres to determine when to replenish their inventory. This helps Walmart significantly lower personnel costs, while making the process faster.

Walmart also uses blockchain technology for tracking meat shipments from China, including locations of storage for each piece as well as its sell-by date. This reduces inventory wastage and allows a more expedient response to possible contamination. The overly optimistic sentiment for Walmart can be seen on Acuity’s Asset IQ Widget.

While ecommerce is likely to continue growing, in-store shopping may still account for the lion’s share of retail sales. Large retailers like Nike have already taken the lead. The sportswear giant has already opened immersive ‘Rise’ stores that offer shoppers a high-tech experience. Retailers will continue to look for creative ways to offer unique experiences, with the help of augmented reality, interactive kiosks, and apps for in-store use. 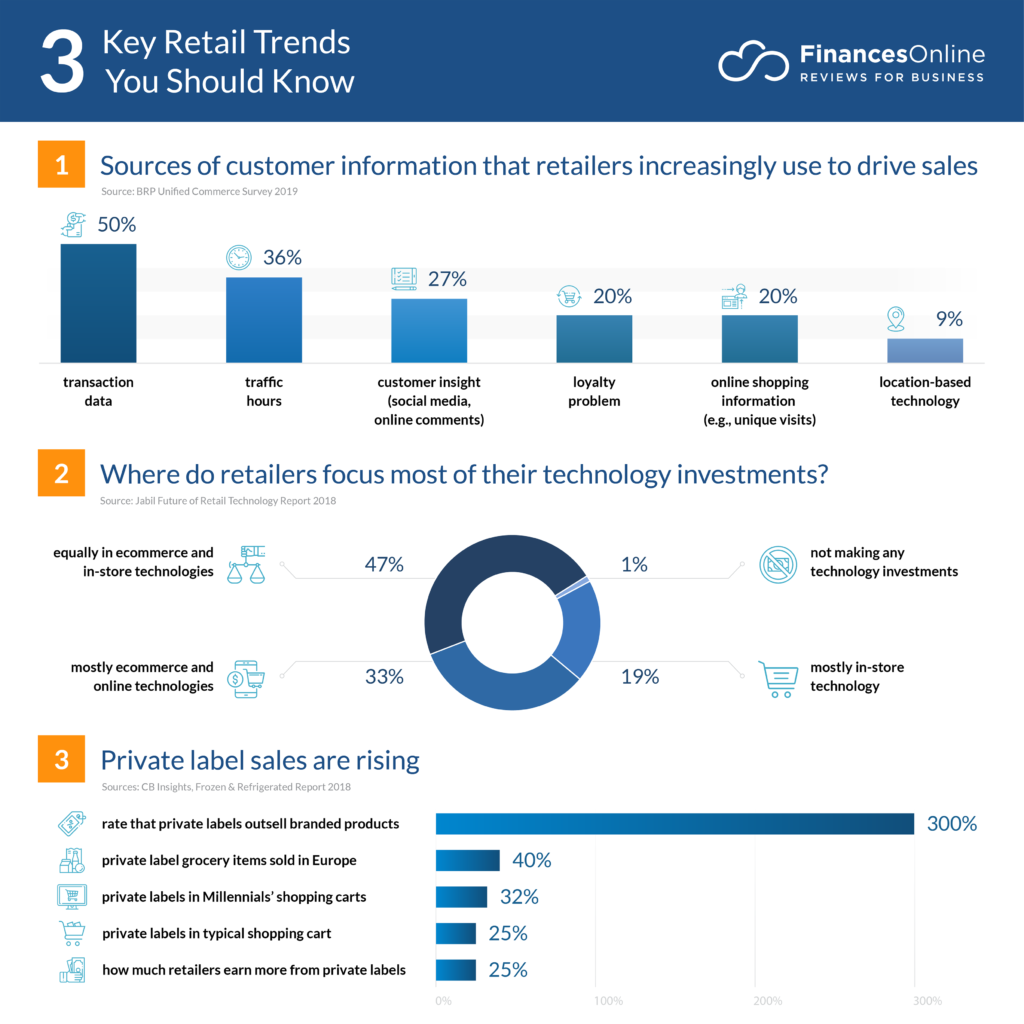 Aligning to What People Want

While Starbucks uses an app as the primary ordering and payment method, Lowe’s uses a fleet of robots to assist customers in their stores. These lower personnel costs and human errors, while making it easier to analyse people’s preferences to launch new products or offer deals accordingly as well as achieve hyper-personalisation.

Technology can also help businesses address a more socially responsible consumer base. For instance, diamond giant De Beers uses blockchain to track their product from the point of mining to the point of sale, to assure customers of conflict-free stones, apart from verifying their authenticity.

It is important to bear in mind that technology adoption comes at a cost. Companies with deeper pockets will probably strengthen their positioning through 2023. Technology-driven efficiencies, supplemented by pandemic era learnings, will be a major contributor to business resilience, and can support stock valuations through 2023. Investors should also keep an eye on new-age retailers and RetailTech companies going public.