Tesla had a monumental year in 2020. The EV maker sold nearly 500,000 cars. Despite pandemic restrictions and a global semiconductor shortage forcing factory shutdowns, Tesla improved its 2019 delivery numbers by 36%.

This resilience, coupled with exuberance around Tesla’s perceived leadership in the EV sphere, was handsomely rewarded by the equity market. The manufacturer saw its shares shoot up by almost a whopping 700% during the year, rocketing it into the S&P 500 index. The Palo Alto, California-based company now dwarfs traditional automakers, such as Ford, GM and Volkswagen, in terms of its market capitalisation.

Tesla continued to post impressive figures in 2021, delivering 184,800 vehicles in the first quarter, outperforming the consensus estimate of 169,850 units. Its full-year reports indicate an installed production capacity of just over a million vehicles.

Tesla is By No Means Invincible

In its rear-view mirror, the company can already see competition fast approaching. Despite its significant delivery ramp-up, its global market share of EVs (including hybrids) slipped from 17% to 16% in 2020. Its competition, comprised of both traditional automaking giants and fellow EV startups, helped chip away at Tesla’s dominance. Although traditional automakers have been slow to respond to the transition to EVs credibly, one of the first off-the-blocks is Volkswagen. The German automaker has assembled a rapidly expanding hybrid and pure-electric vehicle portfolio, growing its EV market share to 13%.

While Tesla has seen a retreat due to valuation concerns, a transition to cyclical stocks and, more recently, a safety scandal, Volkswagen’s stock has appreciated over 70%. Volkswagen is finally getting its bite out of the ‘EV premium’ that Tesla was hogging.

Sentiment for Tesla remains overwhelmingly positive, while sentiment for Volkswagen reflects market expectations of the German company being a meaningful rival in the EV space. This can be seen from Acuity’s Trading Dashboard. 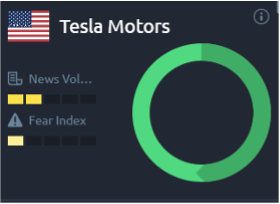 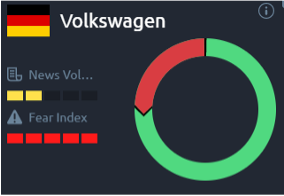 The German company had announced investments of over $50 billion in EVs in 2018, in the aftermath of “Dieselgate”, and has made significant strides since. CEO Herbert Diess said that the group intends to get close and then surpass Tesla. The question is, how credible is VW’s challenge?

It is not the marketplace, but battery production that is the battleground in the EV space. Both VW and Tesla have been intent on researching the cost and operational efficiencies in their batteries.

VW’s battery plan announced as part of its “Power Day” is to manufacture a Unified Cell Battery in-house. The time of the announcement seems strategic, helping the German group shrug off a patent infringement dispute between its key battery suppliers.

VW expects a cost saving of up to 50% from battery improvements, driving costs significantly below the $100per kWH level. This compares well with battery costs of about $147 per kWh currently. Around 15% of these savings is attributed to design changes. A prismatic structure is replacing the pouch cell design of outgoing suppliers. VW believes the industry will transition to advanced solid-state batteries by the middle of the decade. The prismatic design will help provide the best conditions for the transition.

A further 20% of the cost and operational benefit is attributed to improved battery chemistry, with specific mixes designed for each EV’s purpose across the fleet. Analysts expect the company’s battery push to make it the second-largest cell producer in the world. The group expects to use unified cells in 80% of their cars by 2030. To enable this, Volkswagen is currently setting up six Giga factories, capable of producing 240gWHs a year.

Tesla is also flexing its muscles here. The company said its battery improvements could reduce its battery pricing by 56%. These improvements include a continued transition away from controversial and expensive Cobalt-based battery mixes (12% reduction), a size efficient shingle design (14%), a shift to dry electrode production (18%) and a decrease in weight by placing the battery as part of the chassis structure (7%). This is expected to reduce Tesla’s costs significantly below the $100kWH mark by 2023. The still unproven battery production reform can potentially allow Tesla to produce 1tWH of batteries in the space taken up by factories that currently produce 150gWH. One plant alone might be able to produce more than VW’s six factories.

UBS analysts emphasised that VW currently has a $1,300 per car battery cost disadvantage versus Tesla. Despite improvements, the Swiss bank expects Tesla’s “vertical integration and innovative power” to ensure this gap persists. Tesla could stave off competition from VW in the battery space, at least to the end of the decade. During this period, its production capacity will also dwarf that of Volkswagen. On the other hand, VW’s in-house battery innovation journey is only getting started, and calling Tesla a winner in the battery war may be premature.

Tesla expects another record-breaking year of EV production and deliveries. Its current capacity is just over a million units, distributed among its two factories in the US and one in China. The company is also in the process of constructing another two factories, and four are in development. Experts estimate at least 750,000 cars to be delivered.

During its Battery Day announcement, Tesla founder Elon Musk also unveiled plans to launch an entry-level $25,000 car, which is expected to reach the market in 2023.

VW is expected to lag Tesla in deliveries this year, but only just. UBS expects the German company to deliver 700,000 EVs, a doubling of EVs as a percentage of total sales. If this growth rate continues, VW’s sales could overtake Tesla’s in the next couple of years.

Here’s where battery capacity comes into the picture again. This would be a notable long-term constraint, especially if Tesla’s improved factories are online by 2030. Before we’re convinced about Tesla’s lead, let’s not forget that VW has a meaningful edge – its existing factories. The company has huge capacity and can convert its internal combustion engine factories to battery and EV production. This is in-line with the group’s projections of EVs making up more than 50% of sales in the US, Europe, and China by 2030.

VW also has a more extensive product portfolio and aspirations of launching 75 EVs and 60 hybrids by 2030. The hybrid market also gives VW access to a space that Tesla does not cater to.  VWs strategy is likely to be one of volume across their various group members. The cost advantages of scale could prove to be a significant tailwind on sales figures.

As much as software has been Tesla’s forte, it has been VW’s stumbling block. Tesla sees its cars as a piece of technology, coding regularly updated software on customised specialised hardware. Its approach has largely been a success, despite the multiple setbacks suffered by its autonomous driving feature.

In 2019, VW launched the ID.3, its first EV. Software issues plagued this model from its launch. Multiple parts from multiple suppliers failed to interface and operate as intended. While this wasn’t a deterrent to the popularity of ID.3 in Europe, VW is going global with the ID.4 in 2021, and additional glitches could derail its EV plans.

The German automaker plans to produce 60% of its software in-house, up from 10% currently. To that end, the company has doubled its spending on digitisation efforts to $32 billion and is planning a new software stack for vehicles called Project Artemis. Could this become the battleground for EV supremacy in the future, instead of battery production? If VW is to pose any meaningful challenge to Tesla’s existing capabilities, it will need Project Artemis to be incredibly successful.

As of now, VW lags Tesla in both battery technology and software. However, at its disposal, the German EV maker has a group that churns out nearly 10 million cars a year. The company also seems to have a hawk-like focus on at least 20 million of its EVs being on the road by 2030. VW’s ability to find the next gear in mounting a serious challenge to Tesla will rest on the company slowly turning its empire of scale from internal combustion to electronic, while improving its technological capabilities.

In the short term, the competition is likely to be one of price, rather than features. VW’s new ID.3, for example, is much cheaper than Tesla’s competing Model 3. It also has a gross margin at par with the Golf, a popular VW brand traditional car. VW’s goal would be to make EV offerings even cheaper through volumes and grab a market share before Tesla can enter with its proposed $25,000 EV.