Last month, French President Emmanuel Macron said he hoped to see at least 10 tech companies in Europe reach valuations of more than €100 billion by 2030. Europe does have some large tech names, like SAP, ASML, Infineon, Spotify, and Capgemini. However, the region is yet to produce a company that’s the size and footprint of American and even Chinese tech behemoths, like Amazon, Apple, Google, Alibaba, and Baidu. Against this backdrop, is Macron’s vision merely a distant dream or can Europe achieve this goal?

Europe faces certain unique challenges that US and Chinese companies do not. The region does not have a homogenous market that even comes remotely close to that in the US and China. Language is also a significant barrier. If a tech company plans on servicing the EU, it needs to have its website, manuals, tutorials, etc. in more than 20 languages. Moreover, their support teams either need to be multilingual or comprise of many more people. This spells a massive initial investment deterring start-ups. Both America and China have a common language across their expansive home turf.

US and Chinese tech giants gained strength at home, before capturing the international markets. This positioned them well to take full advantage of the opportunities created by the pandemic. Even now, the sentiment for both indices is positive, as can be seen in Acuity’s Trading Dashboard. 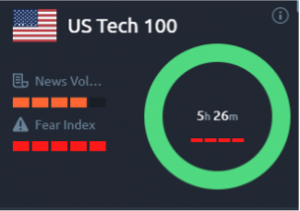 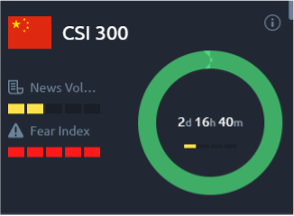 However, the diversity in Europe’s home turf works to the disadvantage of tech companies from the region.

Europe may not be the global leader in tech innovation but has certainly evolved into a leader in tech backlash. The EU authorities have come down heavily on tech companies even for suspected misdemeanours, ranging from tax evasion to invasion of user privacy and monopolistic practices. They are erring on the ‘early to regulate’ side, rather than being too late.

Have the EU authorities taken Netflix’s Black Mirror a little too seriously? It certainly seems so, as regulators consider hypothetical situations to create stricter rules to curb technology. In their latest move, the authorities are considering all possible kinds of harm that technologies like AI and facial recognition may inflict.

The European Commission’s proposed regulations around artificial intelligence calls for a ban on the use of what it terms as “high-risk” AI systems. Companies that fail to meet these highly restrictive standards could face fines of as much as €20 million, or 4% of their turnover. Last month, Europe’s regulators also proposed a complete ban on facial recognition systems in publicly accessible spaces. We can imagine what lies ahead, with the EU’s tech watchdog, the European Data Protection Board, saying that this ban is a “necessary starting point.”

While it’s necessary to have checks and balances in place, an ever-tightening noose around the neck of the corporate sector may thwart the next Netflix or Amazon from ever getting off the ground.

Let’s put thoughts of a possible robot apocalypse aside and consider the more plausible use of AI in self-driving cars, the banking sector, visa applications, customer servicing, and test scoring. The fintech sector, for instance, shows immense potential for using sophisticated algorithms to assess creditworthiness and extend collateral-free loans to individuals who would otherwise not be eligible. By restricting such algorithms, financial inclusion takes a severe beating. While in Western and Central Europe the unbanked comprise a low 6% of the population, the proportion is around a third of the population in Eastern Europe. What does that mean for businesses? Financial exclusion due to such regulations works as a three-pronged dagger for businesses. It restricts the scope of fintech firms, reduces personal spending (and, therefore, demand) and makes it more difficult to access seed funds for start-ups.

We’re all for regulations, but not those that nip tech innovation in the bud. Apart from tech regulations, Europe also has stringent labour laws. This is stifling for the rapidly evolving tech segment, which needs to be agile.

The Other Side of the Coin

The ray of hope is that the European Union aims at achieving tech sovereignty. The bloc is investing billions of euros into technologies that it considers are fundamental to this objective, in a bid to reduce its dependency on the US and China.

European start-ups raised a whopping €38.5 billion in 2020, only to break that record level by raising €43.8 billion in just the first half of 2021. Among the most notable are Sweden’s BNPL (buy now pay later) firm Klarna, Germany’s stock trading app Trade Republic and Britain’s payments provider Checkout.com. These companies are not just defying economic uncertainties, but also sustaining themselves in a highly challenging regulatory environment.

Moreover, even against the pandemic-induced challenges, Europe is a strong economy and has the wherewithal to grow tech giants. To encourage tech companies, the bloc should look at loosening the regulatory noose and instead extending its support via tax credits and tech incubation initiatives. The EU also needs to come together to provide a homogenous and large market for tech products. It can also make it more attractive for tech collaborations with US and Chinese firms. For us to see the next Netflix or Amazon emerge from the EU, the bloc needs to strengthen its resolve to build and support an ecosystem that encourages the growth of tech giants.