The winter of 2021 finds the European Union on an interesting footing. The Q3 economic output surpassed the pre-pandemic levels, putting the bloc firmly on the road to economic expansion. Policymakers can now more confidentially consider weaning the economy off the pandemic-induced support and focus on specific objectives to lead the EU through the phase of rapid economic expansion.

This is a brave new world for Europe. It’s a region where demand growth has been hard to come by over several decades. The current situation offers policymakers the opportunity to address this and grow the GDP base.

On the other hand, however, a resurgence of covid-19 cases and supply bottlenecks weigh on growth expectations. Over these looms the global macroeconomic spectre de jour – high inflation, which hit 4.9% in November, the highest since the euro was launched. Its uptick to 6% in Germany is even more worrisome. This is the highest inflation print since Germany’s reunification and the country has exhibited strong inflation aversion.

It’s a fine balance now, between a historically expeditious recovery and strong growth headwinds. So, what are the prospects for the EU heading into 2022?

Private consumption is a pivotal growth driver in the EU. Of the 2.2% sequential growth recorded in Q3, Eurostat estimates household consumption to have contributed 2.1%. With restrictions being lifted, new avenues have opened for consumers to spend their savings and the ECB expects a marked decline in the considerable household savings that were built up during the pandemic. While labour markets still have slack, labour conditions are improving, and growing incomes will help sustain consumption.

Although the EU’s unemployment rate is a high 6.7%, it is easing. Employment is expected to cross pre-pandemic levels in 2022. Moreover, ECB President Christine Lagarde has stressed that the central bank will not lift rates until labour market conditions have normalised, which will support consumption.

In its Preliminary Assessment of the Euro Area, the IMF lauded constituent countries for announcing 2022 budgets that are accommodative and supportive of recovery.

The ECB’s Pandemic Emergency Purchase Program (PEPP) is scheduled to expire in March 2022. The central bank is widely expected to ramp up asset purchases through its usual channels until economic conditions support tapering. Billions of dollars in the form of Next Generation EU (NGEU) and Recovery and Resilience Facility (RRF) funds promise not just to facilitate recovery, but also restructure the European economy in the longer term. If implemented effectively, these funds could significantly widen the EU’s GDP base.

European prospects will also be influenced by a re-examination of the Stability and Growth Pact. The SGP includes a 60% Debt-GDP ratio ceiling, which the European Stability Mechanism’s Managing Director, Klaus Regling, says is “no longer relevant”. The Pact, suspended during the pandemic, is being assessed and amended to reflect European requirements in the future. This may include the fight against climate change, adoption of new technologies, and semi-conductor investments.

In hand with fiscal support, enhancing the fiscal flexibility of member nations will contribute positively to output. Berlin’s incoming administration has stressed balancing stability with growth and investment, which signals a more open outlook to imminent EU fiscal changes.

Could Inflation Cost a Fortune?

The threat of inflation is very real. And inflation disincentivises economic activity, including household consumption. This could spiral into stagflation. Other central monetary authorities, including the Federal Reserve and Bank of England, have already embarked on or scheduled a tapering of their stimulus measures. The ECB has not wavered from its stance of inflation being temporary. However, the EU operates against the backdrop of rising costs due to a surge in global energy prices, supply chain bottlenecks, and the reversal of the pandemic VAT cut in Germany, all of which seem anything but temporary.

Let’s look at all three culprits:

Despite these headwinds, President Lagarde has been optimistic about the European economy continuing its expansion. The major equity indices appear to back the President’s opinion. The DAX 40, CAC 40, and STOXX 50 have all posted gains year to date. The sentiment for these indices is largely positive, as can be seen from the Acuity Trading Dashboard. 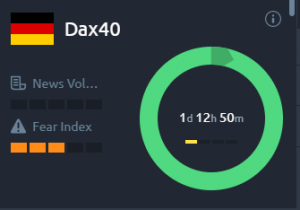 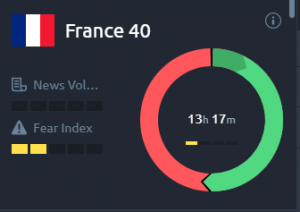 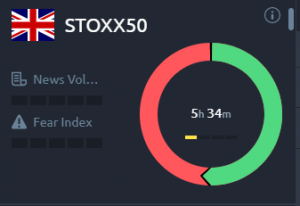 Lagarde’s stance is not without logic. While inflation could burn hot through the winter months, monetary tightening may not help the case. This is because the effects of monetary tightening are typically felt only after around 18 months, by which time the upward pressures on inflation could wane. The ECB has to be mindful about the bloc slipping back into historically low inflation under tighter monetary conditions.

Supply chain bottlenecks might be protracted. In contrast, the European Commission expects energy prices to stabilise by Spring 2022 with short-term effects addressed by national policymakers. Similarly, the impact of the German VAT reversal is something that is predictable and stable.

Inflation could well ease off through 2022, sliding below the EU’s 2% target by 2023. While inflation is grabbing headlines now, the risk of sustained runaway inflation is low.

The jury remains out on the magnitude of headwind posed by Omicron. The new variant has already curbed travel, which is likely to impact EU nations dependant on tourism.  However, there are encouraging signs, with most people experiencing milder symptoms and two-thirds of the European population being fully vaccinated. Moreover, European economies have learnt to operate with reasonable restrictions.

Despite a number of challenges, the European economy’s 2022 prospects seem bright. The EU is taking advantage of the emergence from the recession to implement structural changes that will affect the Union for generations and ensure policy that allows flexibility in the new infrastructure. These changes could prove to be exactly what the historically laggard European economy needs to compete with the US and China’s steamroller economies.

Is it Time to Short Hyper-Growth Stocks?

Is it Time to Short Hyper-Growth Stocks?