China spent most of the last decade as the stalwart example of Asia’s potential. Dubbed as the world’s factory, the Red Dragon is often the first country on investors’ minds when they consider investing in Asian economies. That’s the reason it constitutes the lion’s share of the Emerging Market and Pan-Asian indices. In the centre of many global supply chains, China has resiliently spearheaded global economic growth for years.

Then came covid-19. The pandemic decimated the country, which continues to impose stringent restrictions to combat rising infections. The government’s zero-covid policy, which imposes lockdowns in regions till there are no reported cases, is in stark contrast to all other nations that relied on a coordinated vaccine rollout effort.

On the other hand, other countries employed monetary tools to combat the crisis, triggering record inflation. Beijing’s lockdown-driven approach has kept inflation at bay, with a CPI (consumer prices index) of just 1.6% reported in November. This doesn’t mean all is well in China. There are severe consequences of its mass shutdowns.

While Beijing has recently assumed a more pro-growth stance, diversification away from China’s volatility is worth considering. Here’s a look at the most promising developing countries in the continent. 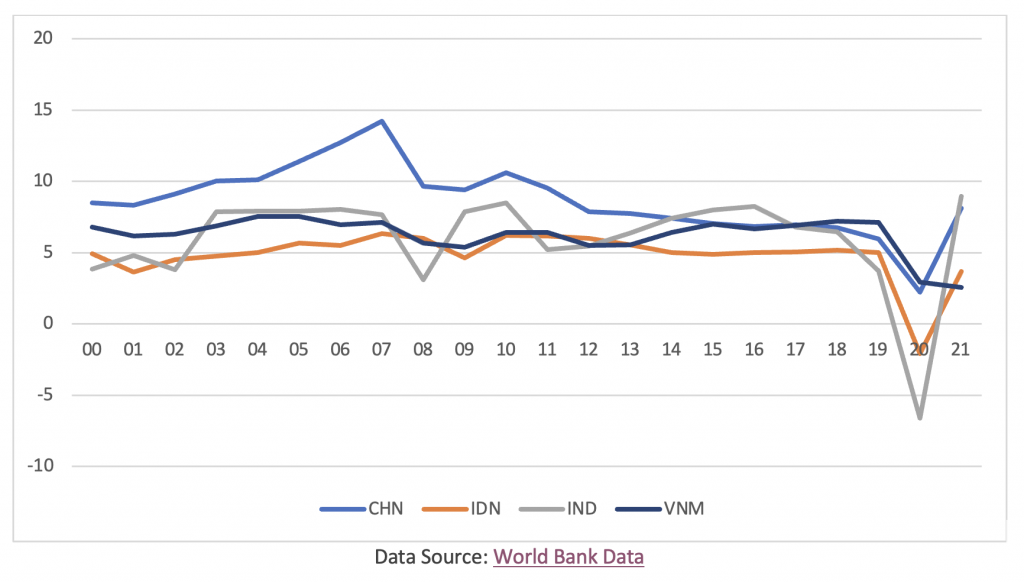 India: Potential to Become a Growth Engine for the Global Economy

What did India do differently?

It went by the book, the one authored by Adam Smith (father of modern economics). The Wealth of Nations suggests a demand-side approach to warding off recessionary pressures, calling for governments to allocate funds for infrastructure development to spur economic activity, rather than triggering supply by handing out money to households, which fuels inflation in the longer run.

An effective vaccine rollout and continued investments in industrialisation have helped India weather the post-pandemic storm. The country’s equity market has matured and grown, even with recessionary winds blowing across the globe in 2022. The NSE Nifty 50 is up approximately 7% year to date, compared to a nearly 18% slump in global stocks.

What are the prospects?

Goldman Sachs expects India to achieve GDP growth of 5.9% in 2023. The country could benefit from growth in global offshoring, digitisation and energy transition. A slowdown in global economic growth could push India to become the back office to the world, with businesses in the US and Europe looking for more cost-effective solutions to protect their bottom line. Morgan Stanley projects the global spend on outsourcing to grow from the current $180 billion to more than $500 billion by 2030.

The government’s “Make in India” initiative, with tax cuts and pro-infrastructure policies, has been driving growth in India’s manufacturing sector in the post-pandemic era.

On the demand side, India has a household debt to GDP of just over 14%. The average consumer is one of the most underleveraged in the developing world. The growth of digitisation enabled micro and decentralised lending, and the growing acceptance of credit tools is expected to boost consumer spending in 2023. India’s growing appetite for digital payments is great news for companies like Visa, PayPal, and Western Union. The sentiment for such companies is overly bullish, as can be seen on Acuity’s AssetIQ widget.

India is undertaking green initiatives in a big way. Two thirds of the country’s new energy sources are expected to be supplied from renewables. This could also increase domestic demand for green technologies. Global automakers targeting India’s EV demand could benefit immensely from this trend.

Indonesia: The Right Place, At the Right Time

Indonesia is another economy that achieved rapid growth in 2022, at 5%. The economic growth projections for 2023 stands at 5.2%, which is only behind Saudi Arabia and India among the G20 countries. Indonesia’s economy is on track to becoming the world’s seventh largest by 2030.

The country found itself in a strategically strong position due to resource shortages following the Russian invasion of Ukraine. Exports, particularly of coal and palm sugar, have grown by more than 20% in 2022. Being an exporter of commodities, Indonesia benefited immensely from the spike in the US dollar and rising commodity prices. The country is also the world’s largest producer of nickel, generating 38% of the global refined nickel output. This metal is becoming increasingly important due to its use in EV batteries. In fact, analysts expect the burgeoning EV market to displace the stainless-steel industry as the largest consumer of nickel over the next decade or so. This trend could aid companies involved in nickel mining and refinement, like BHP Group.

Indonesia also has significant room for fiscal stimuli, with a debt to GDP level of just 39%, which is substantially lower than the 60% limit set by Jakarta. This could drive further economic growth in 2023.

Vietnam’s economy grew by 7.5% in 2022, even while most of the world battled with recessionary fears. Of course, it’s important to bear in mind that the country is small and far from being a developed one. The World Bank projects Vietnam’s GDP to grow by 6.7% in 2023.

What Vietnam did right

Hanoi has focused on its infrastructure investments, spending 6% of GDP in 2022, highest among the ASEAN countries. Its ASEAN membership has also been instrumental in the growth of its trade. The EU-Vietnam agreement, for instance, is expected to have propelled 40% of Vietnamese businesses. Vietnam also benefited significantly from its trade agreement with the UK and its involvement in the Comprehensive and Progressive Agreement for Trans-Pacific Partnership.

Given Vietnam’s net zero emission target by 2050, the government is likely to continue spending on green technologies in 2023. This is good news for EV makers.

Thanks to China’s estranged relationship with the US, Vietnam has become a manufacturing hub for foreign companies like Apple and Hasbro. Labour costs in the country are much lower than in China or India, while the workforce is well educated and polite.

Companies targeting the customer base in Vietnam will have exposure to the country’s healthy economic growth. This includes the likes of Adidas, Apple and Samsung.

With the major economies likely to face recessionary headwinds in 2023, investors can consider diversifying their portfolio by targeting opportunities from other countries. Also, while there are concerns around China’s policies, its economy is poised for growth next year.